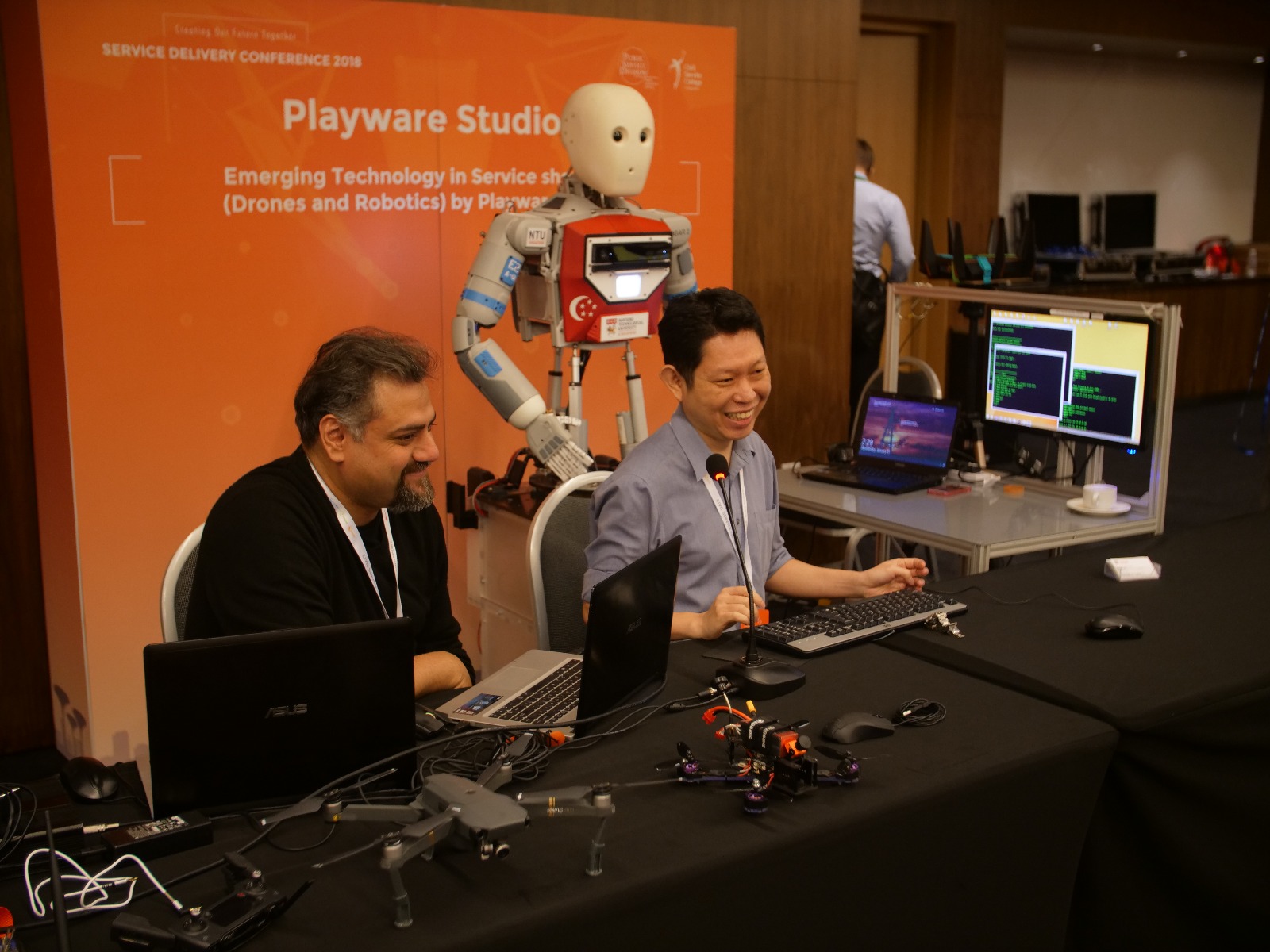 Service Delivery Conference 2018. Was held on 31 Jan 2018 at Suntec City Convention. This year, the conference focused on using technology as a key enabler to deliver current and future public services. The hope was to inspire ideas and possibilities on citizen-centric service design and technological innovations to transform service delivery.

Playware was invited by the organisers, Civil Service College of Singapore to showcase future centred service technologies such as Robots and Drones.

Playware was proud to facilitate the showcase of the NTU EDGAR robot at the event. Big ‘Thank you’ Dr. Wong Choon Yue for accommodating our request!

Read more about the robot here. The NTU EDGAR Robot showcased at SDC 2018 with Playware

Drones are a remote, flying camera, with a variety of applications.

For example, National Parks could use specialized drones to access plant health by taking pictures using special multispectral cameras which “see” more than the human eye. By measuring the relative intensity of colour in particular frequency bands, they can identify undernourished or diseased plants. Similarly NEA could use drones to locate and access hard-to-reach Mosquitoes breeding sites.

Another immediate opportunity lies in construction and related projects. Allowing the capture of mistakes-made early on in a project which may otherwise not be noticed until much later. Drones can be used to measure building sites precisely during construction and track the use of raw materials on site to ensure that everything is going according to plan. Drones can also streamline the process of grading—preparing the ground for constructing a building, road or railway. This involves measuring the original topography, which by conventional methods might take several weeks for a large site.

A drone can measure the volume of dozens of stockpiles in a single flight, taking thousands of measurements that are turned into an accurate point cloud within an hour. As well as being far quicker and more accurate, it is also much safer. Falling off stockpiles is a real occupational hazard. Using drones to survey quarries and building sites also means human surveyors do not need to venture close to dangerous sheer drops.

Drones can be used for inspection of buildings and other infrastructure, such as pipelines, wind turbines, electrical pylons, solar farms and offshore platforms. At the moment, inspecting a roof for storm damage or checking the state of an electrical pylon involves sending someone up a ladder, which can be dangerous.

For police use, drones are a cheaper and quieter alternative to helicopters for monitoring crowds and can be used to create detailed 3D models to help investigators of traffic accidents.

Drones showcase by Playware at SDC 2018