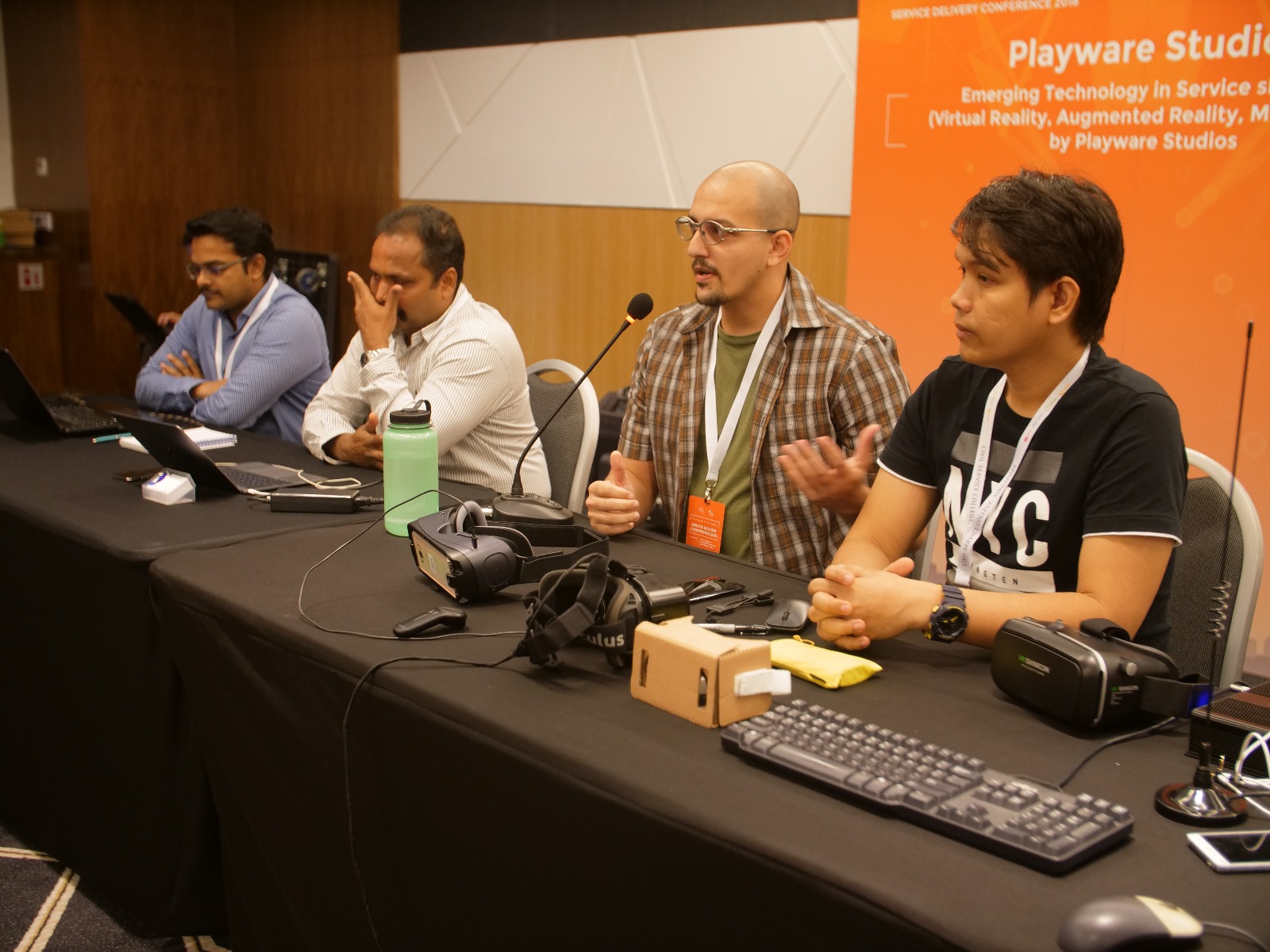 The Service Delivery Conference 2018 organised by the Civil Service College of Singapore on the 31st of January at the Suntec City Convention Centre.

Playware Studios showcased technologies and solutions utilising Augmented Reality, Virtual Reality and Mixed Reality as well as Drones and Robotics. The solutions were based on COTS hardware such as Microsoft Hololens, Oculus, Samsung Gear and HTC Vive.

Virtual presence is similar in concept to telepresence, in that it tries to give the impression to the user as if the user is present in one place or environment, even when one is physically not situated in that environment. The difference between the two is that telepresence is a networked paradigm by nature, whereas virtual presence does not have to be networked and can run completely locally.

For example, a virtual presence system can be used by the URA, HDB or other agencies to demonstrate to the public what a planned development will look like. This can be done by creating a virtual copy of the planned development using either Virtual or Augmented reality technologies and equipment. Architects and city planners who could create virtual cityscapes or transportation grids and then demonstrate them to their clients—a vast improvement over 2-D representations and more efficient and interactive than physical mock-ups.

Traditionally, cognitive assessment has made use of standardized paper-and-pencil batteries. These suffer from restrictions shortcomings such as: boring, dense, time-consuming, labour intensive, and demanding. Such Neurocognitive assessment under typical clinical laboratory/survey conditions are also unsatisfactory because they present trials independent from any activities of daily living or multi-tasking, and for this reason, are somewhat lacking in ecological validity.

Virtual, Augmented and Mixed reality are emerging tools with great potential for use in psychometric and cognitive testing. They involve the use of simulated environments that users perceive as comparable to real world objects and events; moreover, they ensure the chance to objectively measure behaviour in challenging but safe and ecologically valid environments, while maintaining strict experimental control over stimuli delivery and measurement.

Working in tandem with IOT devices, VR, AR and MR interfaces can give workers and managers digital system content tailored to their unique tasks. Agencies and Ministries may be able to boost employee productivity, streamline work processes and improve safety with real time information that intelligent devices may be generating on the site and which can be reviewed in a hands-free, ready-access, heads-up manner that maintains their autonomy and mobility.  Text, blue-prints, diagrams, audio and video, and animation can be projected over pieces of equipment or at specific locations.

Multidisciplinary teams will be able to work seamlessly together on projects within and across agency walls. VR, AR and MR can support this kind of next-generation interaction by replacing shared productivity tools and videoconferencing with immersion and a sense of presence.

Workers in disparate locations (for example one in the field and the other in the office) can interact with the same digital artefacts, just as if they were in one location manipulating the same physical objects. This can remove geo-temporal constraints from both creative processes and more tangible operations.

There are applications for these technologies in Raising Awareness, Complex Scenario Communication, Training, Education, and On-the-job-learning: AR and VR can be used to onboard new employees and develop existing talent by immersing them in highly realistic, virtual work environments that feature both educational information and interactive problem-solving challenges.

Immersive environments offer several advantages over traditional teaching/learning methods. For example, they provide trainees with safe (virtual) exposure to complex and potentially dangerous or critical real-life equipment, events and scenarios. These technologies could also enable first responders to practice how they respond to challenging situations such as interacting with hazardous materials in public spaces.

By gathering a 3D understanding of the surroundings and using that information to seamlessly place digital information within the real space that can be interacted with, AR, VR and MR technologies create a new paradigm for convergence. A digital object’s weight, scale, angle, position, and relationships with other virtual and real-world objects can allow planners, designers and executors to visualize, understand and fashion truly visceral experiences and innovative solutions to complex problems and scenarios.

For example, those same first responders (in the above example) might plug certain variables into a real-life incident as it is unfolding to ‘see’ the prediction of what will happen. They could visualize where the crowds will go, how the flood will expand, where the fire might move, and which people and/or facilities would be impacted.

Virtual reality (VR) has been used for decades as a tool for therapists to administer virtual reality exposure therapy (VRET) in a safe and controlled manner. Due to cost and technology limitations, it has not been widely available. With the advent of affordable mobile VR headsets, there is a new opportunity to apply telemedicine to a range of treatments, reaching more patients and improving lives.

Some examples might include remote teletherapy by qualified practitioners who use VR as a supplementary tool, in-clinic VR therapy, virtual therapists created using artificial intelligence or patient-directed VR therapy in the absence of a professional therapist.

There are many applications for VR, AR and MR for agencies and ministries in enabling the customers to self-help in various scenarios. For example, take a customer calling and agency for remote-trouble shooting. Remote troubleshooting is clunky at best over the phone, chat, or email. In most cases, representatives must try to figure out what the issue is by relying on a customer’s description of the problem, which may not be accurate given that they do not have enough technical experience.