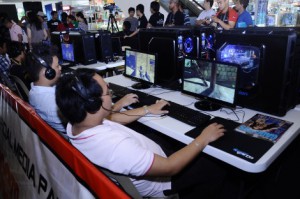 The BBC reports a study undertaken by researchers at the Oxford Internet Institute and the University of Rochester that casts new light on the relationship between video games and violence. The researchers suggest that violent thoughts that arise in the context of playing a game are more likely to be a response to the mechanics of the game, rather than any violent content. A range of tests, including modifying controls to be more frustrating, and replacing the graphic deaths of the Combine in Half-Life 2 with scenes of their peaceful evaporation, were carried out to explore the different factors that led to feelings of violence in players. A desire to be competent and to “come out on top” was, they claim, more of a factor in generating these feelings than the nature of the in-game content: players who hadn’t been coached in using the more frustrating controls reported more aggressive feelings than those playing the more violent version of the game.

The study doesn’t show that violent images have no effect on gamers. But it does raise some hugely interesting questions about the relationship between form and content, about the different goals that players work towards when playing a game, and about the sorts of features that would promote engagement and learning in educational games. The general claim the authors make is that our own perception of how well we can play a given game (“player perceived competence”) has a positive impact on our motivation – which is associated with reduced aggression. It’s tempting to paraphrase this as saying that feeling stressed at not being able to perform as well as we want to is what leads to aggressive thoughts, though I think the authors are making a more subtle argument. And I can’t shake the feeling that the study conflates different kinds of aggression: there’s a distinction to be made, I think, between the frustration familiar to most gamers about to ragequit a poorly-designed or cognitively-overloading game, and the kind of aggression portrayed in a game like Manhunt. But that’s a product of the reporting, rather than the study, and the study itself is behind a paywall, making it difficult to engage with the substance of the researchers’ work.

In any case, the interesting element here is the focus on perceived competence, and the emphasis this places on the mechanics and controls of a game, beyond the content or art direction. From a theoretical perspective it revives the specious distinction between the system underlying a game and the narrative presented to the player, historically characterised as the ‘ludology vs narratology’ debate — by concentrating on the extent to which a player is able to manipulate the interface of a game, or how far they are able to perform particular actions, it might be argued that the researchers risk neglecting the role of narrative in constructing players’ ideas of the game. There’s a difference between shooting projectiles from a gun at modified human soldiers (as happens in Half-Life 2, the game used by the researchers) and lobbing a ball at a pane of glass, even if the physics are similar. It raises also the question of what it is that players believe themselves to be competent at: are they aiming to perform flawlessly, explore the gameworld, advance the storyline, meet community-set goals (such as completing a speedrun), or meet their own arbitrary goals (such as gathering every power-up)? Different games establish different kinds of accomplishment, and players might work towards any or several of them at once. Although a basic level of mechanical competence is necessary for participating in a game, it’s not clear that players need to excel in order to perceive themselves as competent.

But these questions aside, what are the implications for designing learning games? The connection between player-perceived competence and motivation should be interesting to game developers. It resonates with well-established ideas about ‘hard fun’ and developers’ craft knowledge of the appropriate degree of challenge: people making games already know that too much, or too little, challenge is demotivating. From a research perspective it’s reminiscent of Vygotsky’s famous notion of a ‘zone of proximal development’, an idea often mentioned in connection with Papert’s ‘hard fun’ and learning games. But I think the crucial aspect of this study is that it might remind developers to be more aware of the demands made on learners by the mechanics and interface of a game. The challenge of an educational game doesn’t just lie in the content or narrative: it’s a feature of the ways learners are able to function and exert their agency in the game world. Itâ€™s important to make sure the mechanics and the controls of the game aren’t presenting learners with an additional challenge to overcome.