I’ve been playing Mini Metro, an abstract game where you have to connect cities by drawing, and redrawing, the metro plan to keep pace with an ever-increasing number of residents who want to move around. It’s abstract and minimal (in part because it’s still in alpha), but quietly absorbing. The symbols representing commuters jiggle as the station gets more crowded, and it brings back memories of Liverpool Street Station in rush hour. 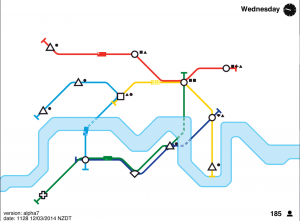 It’s not nostalgia that’s at the heart of the game’s appeal, though. The thing that keeps me playing is being in the thick of a dynamic system, having to develop a sense of the pressures I’m balancing, and gradually coming to understand the more sophisticated elements of the system through experience. Square stations are rare: you have to make sure other nodes on the network can access them easily, unlike circles, which are pretty common. Tunnels slow trains down, so it’s best to cross the river at right angles. You can reverse a train by drawing the line in the opposite direction: useful for last-minute rescue missions to crowded stations. If I had to read a full list of these and the other rules that govern the system, I don’t know if would have know them as well. I certainly don’t think I would have spent so much time playing the game.

The obvious comparison in education is SimCity, perhaps the most visible example of this kind of systems modelling. For over a decade educators have invited students to inhabit the complex relationships between energy, production, consumption, waste, water and the environment, seeing immense value in having them experience this dynamic system firsthand. The cities don’t have to be real to make the point that simple rules lead to complex outcomes: there’s even a sci-fi version, just to underline the point. They don’t even have to be realistic, which is just as well, as this IBM city planner illustrates.

What’s important, in learning about a system, is the chance to experience some version of it. This doen’t have to be a digital version. Dr. Peter Nonacs, a behavioural ecology professor at UCLA, put this notion into practice when he decided to treat teaching his game theory class as a real-life game. Telling his students that the end of term test would be harder than ever, he also told them: you can cheat.

Once the shock wore off, they got sophisticated. In discussion section, they speculated, organized, and plotted. What would be the test’s payoff matrix? Would cooperation be rewarded or counter-productive? Would a large group work better, or smaller subgroups with specified tasks? What about ‘scroungers’; who didn’t study but were planning to parasitize everyone else’s hard work? How much reciprocity would be demanded in order to share benefits? Was the test going to play out like a dog-eat-dog Hunger Games? In short, the students spent the entire week living Game Theory. It transformed a class where many did not even speak to each other into a coherent whole focused on a single task beating their crazy professor’s nefarious scheme… In the end, the students learned what social insects like ants and termites have known for hundreds of millions of years. To win at some games, cooperation is better than competition.

In working out the best way to co-operate, the students were living the principles that the course was intended to teach them, giving them a much deeper understanding of game theory than if they had simply been asked to regurgitate text for an exam. The setting was artificial, perhaps – but the lesson was real enough.

So simulations and experiences can still teach particular principles, even if they’re far from realistic. Maybe Mini Metro will send a new generation of planners to work building the perfect city.

Games for Learning
Day One - The Descent of ...
Mechanics or narrative?